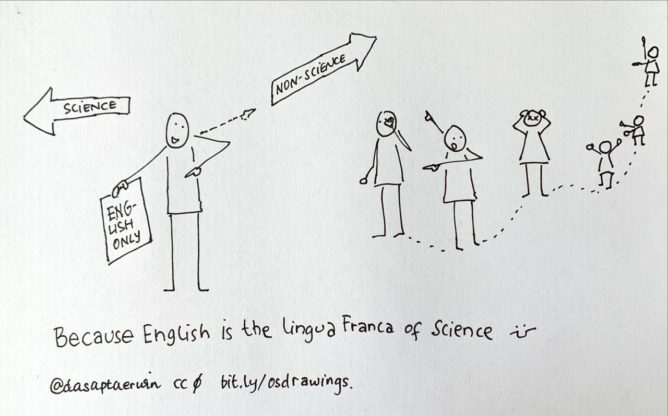 There is a language bias in the current global scientific landscape that leaves non-English speakers at a disadvantage and prevents them from actively participating in the scientific process both as scientists and citizens. Science’s language bias extends beyond words printed in elite English-only journals.

It’s Dasapta from Indonesia. Thank you Victor for inviting me to joining The Translate Science Initiative. Although scientists are coming from every corner of the earth, living perfectly using their own native/mother tongue, but it’s English which has been used as the lingua franca of science.

Conversely, many scientists in Africa, Asia, Latin America and Europe still publish their work in national journals, often in their mother tongue, which creates the risk that worthwhile insights and results might be ignored, simply because they are not readily accessible to the international scientific community. To overcome this dilemma, several initiatives now aim to strengthen the impact and quality of national journals with the goal of gaining greater international visibility for articles published in a language other than English.

Born and raised in Indonesia, a non-English speaking country, it’s important for me to promote the use of national language (Indonesian) instead of English in scholarly communications, because:

Maybe 2021 was not perfect, but we did get Translate Science off the ground. https://blog.translatescience.org/launch-of-translate-science/

As follow up on the story that China wants to write more scientific articles in Chinese: does anyone here know someone in China (at the Chinese Academy of Sciences?) who we could write to to lobby for translating these articles?

This looks cool. Wikitongues is documenting and trying to revitalize endangered languages.

I came across a documentary showing clay tablets used for writing long long ago. Now that we have Translate Science this made me wonder how they have been translated.

Does anyone here know how that is done?

If they have software/tools to find and make such translations would that be something we could adopt/adapt for translated scientific articles?