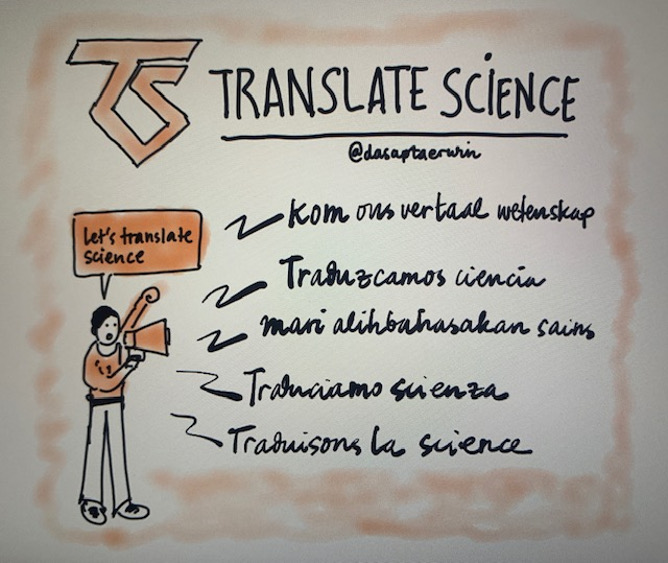 The groups members have different background and motivations. Hydrogeologist Dasapta Irawan would like scientists to be able to write in the language of the people they serve. Ben Trettel works on the breakup of turbulent water jets and regrets that so much insight from the Russian turbulence literature is ignored. Victor Venema works on observed climate trends and needs information on (historical) measurement methods, which are kept in local languages; his field needs to understand climate impacts everywhere and quality data from all countries of the world. Luke Okelo, Johanssen Obanda and Jo Havemann are working with AfricArxiv – the community-led Open Access portal to promote African research output. They are interested in seeing scientific literature in African languages transcend traditional scholarly publishing barriers that indigenous languages come up against and will soon launch a collaborative effort to translate African scholarly manuscripts into various African languages.

For the group the term “scientific literature” has a wide spectrum of forms and can mean anything from articles, reports and books, to abstracts, titles, keywords and terms. Summaries in other languages are also helpful.

We are interested in a range of activities to help translations: providing information, networking, designing and building tools and lobbying for seeing translations as valuable research output.

We have this blog, our Wiki, our distribution list and a micro-blogging account for discussions on what we can do to promote translations and to provide information on how to make translations and find already existing ones.

Various tools (and communities using them) could help finding and producing translations. A database with translated articles could make them more discoverable. This database should be filled by people and institutions who made translations, as well as with precursor databases and articles from translation journals (from the Cold War era). With appropriate interfaces (APIs) reference managers, journal and preprint repositories and peer review systems could automatically indicate that translations are available. Such a database could also help build datasets that can be used to train machine learning method for the translation of digitally small languages.

There are great tools for the collaborative translations of software interfaces. Similar tools for scientific articles would be even more helpful: translating an article well requires knowledge of two languages and the topic; this combination is easier to achieve with a group and together translating is more fun. Automatic translations could provide a first draft and save a lot of work.

If we could determine which articles are most valuable to be translated that may increase the incentives of (national) science foundations to fund their translation. With the use of the multilingual Wikidata knowledgebase we could improve searching the literature with multilingual tools, so that also relevant articles in other languages are found. In addition we could make text mining multilingual and non-native speakers could be presented with explanations in their mother tongue of difficult terms.

Rather than being appreciated, translations sometimes even lead to punishments. Google accidentally punishes people translating keywords because their software sees that as keyword spamming, while translated articles are often seen as plagiarism. We need to talk about such problems and change such tools and rules so that scientists translating their articles are instead rewarded.

English as a common language has made global communication within science easier. However, this has made communication with non-English communities harder. For English-speakers it is easy to overestimate how many people speak English because we mostly deal with foreigners who do speak English. It is thought that that about one billion people speak English. That means that seven billion people do not. For example, at many weather services in the Global South only few people master English, but they use the translated guidance reports of the World Meteorological Organization (WMO) a lot. For the WMO, as a membership organization of the weather services, where every weather service has one vote, translating all its guidance reports into many languages is a priority.

Non-English or multilingual speakers, in both African (and non-African) continents, could participate in science on an equal footing by having a reliable system where scientific work written in non-English language is accepted and translated into English (or any other language) and vice versa. Language barriers should not waste scientific talent.

As you have read this far you are probably interested in translations and science. Do join us. Write us any time: we have 2-weekly calls and a mailing list. Leave a comment below. Add your knowledge and ideas to our Wiki. Write a blog post to start a discussion. Join us on social media or add this blog to your RSS reader. Spread the message that Translate Science exists to anyone who may be interested as well. …